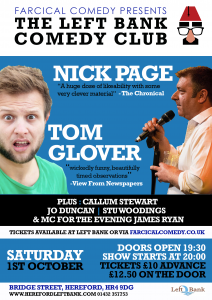 Following on from the success of the Left Bank’s first Comedy Club in September, Farcical Comedy returns with an amazing night of live comedy on Saturday 1st October at our newly opened subterranean ‘Speak Easy Bar’.
Last night was a sell out, so please book early to avoid disappointment.

Opening we have The amazing Tom Glover Westcountry comic Tom Glover burst on to the stand up scene in 2010 as part of the South West new Act of the Year competition. Since then comedy has taking Tom all over the UK as he has put in the work to earn his place alongside the most promising acts to emerge from the South West in recent times. A resident compere at two monthly nights, Tom is happy to fill any slot in your line up offering an engaging stage presence and relaxed charismatic style which make him a hit with any audience. An act that will make you see everyday life in an entirely different way.
Reviews:
“Had the audience in stitches with his wickedly funny, beautifully timed observations” View From Newspapers
“Keeps the room in the palm of his hand, flawlessly funny and a great professional” Edge Comedy

Are Middle Acts are

Headlining the night is Nick Page

With storytelling comics there’s a moment where the audience asks themselves ‘I wonder if that’s true?’. With Nick there is more doubt, because the stories are so outlandish, and yet at the same time there’s the sure knowledge that every story is true, and that his is a life lived laughing from disaster to disaster.

He’s definitely one of those people you shouldn’t like but do. He has an enviable gag rate, with each story and routine filled with set ups, call backs and devastating punchlines. His stories are unique, yet relate to everyone. Everyone has felt frustrated by the legal system, nobody else has tried to go to prison to prove a point. Everyone watches daytime TV, nobody else has been sacked from it for an incident involving a Russian call girl and an antique rocking horse.

Nick placed second at ‘The English Comedian of the Year’ 2016. His debut Edinburgh Festival show had sell-out performances, critical acclaim and a host of 4 star reviews. He is in enormous demand in comedy clubs throughout the UK, as a headline act and MC, and has been for the last 12 years.