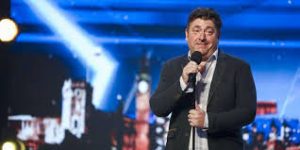 Nick Page
Stand-up comic Nick Page is based in Gloucestershire. He was notably crowned English Comedian of the Year in 2017. Since starting comedy in 2001, all because of a stag do bet, he has performed in more than 30 countries “doing all the terrible gigs that an unknown stand-up comic plays.”

Steffan Evans
Since bursting onto the comedy circuit, Pembrokeshire’s very own bundle of energy Steffan Evans had become one of the fastest rising stars around, supporting the likes of Elis James on tour in 2017 & 2019, compering festival shows including the likes of James Acaster and touring his own shows around festivals all over England & Wales.
Steffan has a razor sharp wit and once you’re hooked you can’t fail to be pulled along. A confident and professional. Regularly MC’s 4 nights a month (and more) which he runs ranging from new material nights to pro nights.

‘A roaring boy if there ever was’ Chortle
‘Marvellous’ Ludlow Fringe
‘A modern-day, working class, coke fuelled Virginia Wolfe’ Odd Night Out

Anna Keirle
Daffy Cornish bumpkin Keirle has funny in her veins, with a disarming daftness and an endearingly babbling manner.”- Chortle
“Anna Keirle gives a set based on a childhood in Cornwall – there are surprises. It’s an entertaining piece from a stand-up able to create engaging personal warmth.”- Fringe Report 2005
Competitions