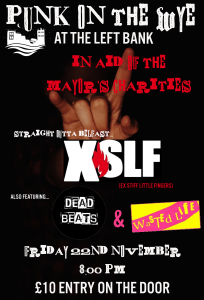 Belfast’s Stiff Little Fingers belong to the select elite group formed on the back of punk in mid to late 70’s. Appearances on Top of the Pops and chart success accumulated until the split in 1983. The group reformed in 1987 and have continued on since then. Co- Founder member Henry Cluney left some years ago but the call of the early days led him to form XSLF (ex-Stiff Little Fingers). Six years ago Henry collaborated with original drummer Jim Reilly and embarked on a short tour comprising of a set of including the most recognisable tunes such as Alternative Ulster, Suspect Device, Nobodys Heroes and At The Edge. XSLF were invited to Hereford to test the water and played their first mainland gig to a sold out venue of 200+ attendees. The group have a great affinity with Hereford and return for their nth time ready for the lead up to (White) christmas. XSLF bring an inclusive feel to their set with a crowd invite on stage for a singalong. They will also be playing tunes from their new album to be released in 2020. XSLF will have guest drummer Glenn from the Belfast band The Defects and the driving force of Ave Tsarion on bass.

In aid of the Mayors local charities, Friday’s gig have two local support bands. Last year’s gig was so successful, there is a reunion with those fresh faced upstarts DeadBeats who play songs from the new wave era performed with suitable angst and power. Original support band to the first XSLF gig 6 years ago are Wasted Life, albeit with a different line up and different name! Don’t let the beards fool you!

Entry is available on the door £10. N.b. Keep your wristband and get into the Heart of Anarchy festival at The Herdsman the following the day for a discounted £5.