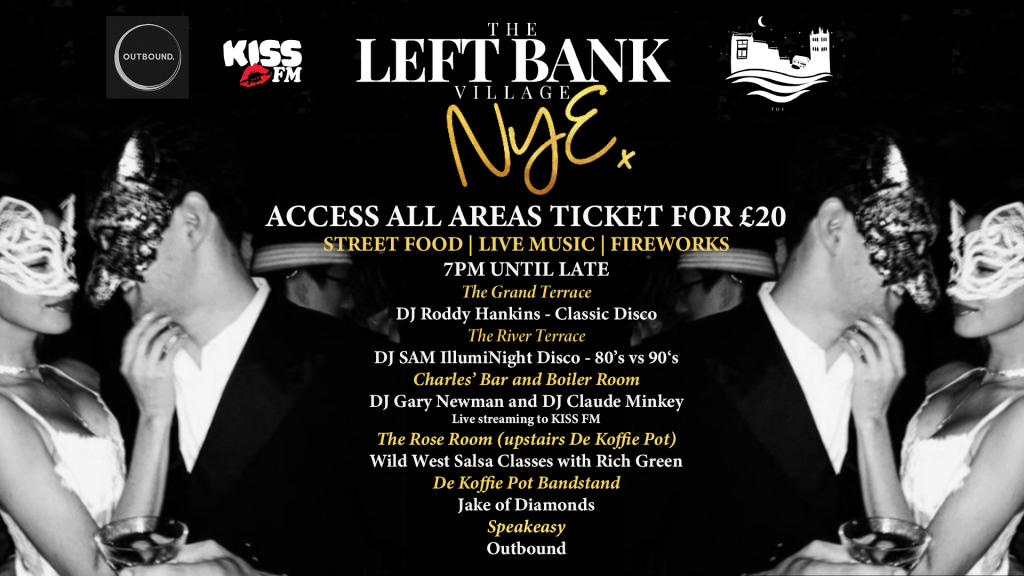 This promises to be the biggest and best night in Herefordshire again so grab your tickets now!

We’re mixing up the vibe in each of the areas at Left Bank Village, this will mean there’s something for everyone with access all areas, so you can pick and choose how you see in 2020 as well as of course, a SPECTACULAR firework display at midnight.

Here’s what we have lined up for you:

Roddy started to DJ in 1974 at the birth of disco, now into his 46th year and still going strong. Roddy has worked in Nightclubs around the midlands for 30 years and was resident DJ for 12 years Thursday nights at Marilyn’s, while still doing mobile DJ gigs. Roddy has been DJ’ing through the eras of Disco, Punk, New Wave, Glam Rock, Trance and House Music. Roddy has played with some big names through those times, including Edwin Starr, Spandau Ballet, The Real Thing, Chesney Hawkes and Mott The Hoople. Roddy has also worked with the comedian Jim Davison and has worked with local charities in Hereford and has ran the Barr’s Court School Prom for the last 30 years. Roddy is a firm favourite here at Left Bank Village and is set to bring his own style and entertainment to our New Year’s Eve celebrations.

Smash into 2020 on New Year’s Eve with our resident award winning DJ Sam Westlake from IllumiNight Mobile Disco. He will be bringing to you the best music with his 80’s vs 90’s night. He will get you in the mood for a drink or two and get you dancing through to the early hours of 2020!

Wild West Salsa Takeover: Upstairs De Koffie Pot will be transformed into the Salsa Centre of Hereford, throw on your dancing shoes and dance the night away with professional dance instructors to put you through your Salsa paces!

Jake had success as a solo artist and was featured on BBC Radio 1 as Huw Stephen’s ‘Unsigned Artist of the Week’. After a successful run of festivals in 2018 Jake has performed a number of times with us, as a firm favourite with the locals we couldn’t do a New Years Party without him.

DJ Gary Newman started his DJ career in 1995 when a lucky competition win on a local radio station (qfm) started a 5 year career as a radio jockey. Not wanting to be left out, he decided to learn how to mix and promptly set about the task in hand. Using his love for soul and disco her was soon mixing it up with funky soulful house and adding his disco influence to sets.

Gary’s style soon got him noticed and he was soon playing clubs in Sweden. After leaving the radio station another stroke of luck came his way, with an impromptu phone call from a colleague in Switzerland. He landed a residency at a nightclub for 7 years playing gigs almost every night, his blend of up tempo house was embraced by the Swiss and he was regularly playing boat parties and gigs around the area.

Gary returned to the UK to his native Hereford where he enjoyed spells warming up for DJ’s such as Jeremy Healey, Graeme Park, N- Trance, Daniel Ravioli, Jon of the Pleased Wimmin, Jon oo Fleming, Soul Avengers, Danny Rampling to name a few, he enjoyed a residency at Saxtys for 6 years. Gary now plays for Cellar Door regularly and he also has a regular radio spot every Friday and Saturday from 5pm til 7pm on KISSFM Sweden where he mixes between soulful and disco house.

Gary will be joined by Claude Minkey and throughout the night they’ll be streaming our event LIVE through to KISS FM and we can’t wait!

Electronic Music from Hereford’s finest – “We’ve had an absolute blast this year – it all started at The Left Bank – that’s where we’ll enjoy the last moments of 2019, going into 2020 with everyone that has supported us.”