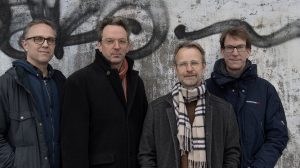 This Swedish band is part of the new movement in European Jazz bringing Nordic rhythms and atmospheres to life. Örjan Hultén, one of Sweden’s foremost saxophonists and improvisers, is a musical explorer always looking for the next challenge. His critically acclaimed quartet Orion was conceived from Örjan’s impulse to create something altogether fresh in 2009. The quartet has recorded four albums and the latest, Minusgrader this year, and has received stunning reviews. In his compositions Örjan Hultén moves effortlessly across boundaries and musical genres. Here and there Middle Eastern and Balkan traits can be heard while one can distinguish traces from Wayne Shorter or Joni Mitchell in other parts. Örjan Hultén’s Orion is featuring four of Sweden’s top musicians, each of them a well-known and celebrated musician/bandleader in his own right. This is the first time the quartet is touring the UK. After this gig the Quartet will be touring other venues in the West Midlands and the UK, organised by Birmingham Jazz for the new Jazz WM Network.